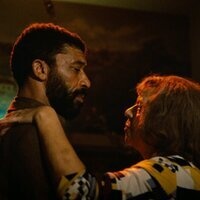 As part of the Film Series virtual Speaker Series, Fassbinder February focuses on the works of Rainer Werner Fassbinder, the prolific LGBTQ+ film director of 1970s West Germany. Once a week, all throughout February, a guest speaker will give a talk on a different film of the trailblazing director. Each film is available on popular streaming services like The Criterion Channel, HBO Max, and/or Amazon Prime. Watch each ahead of time and then join us all month long for interesting and thought-provoking discussions on the many works that focus on politics, gender, sexuality, race, social stigma, and so much more.

On February 4th at 7p.m., Joshua Ray, film critic for The Lens, will discuss

Ali: Fear Eats the Soul has Fassbinder going full-Sirk in this story of an older white woman, Emmi (frequent Fassbinder collaborator Brigitte Mira), who falls in love with a Moroccan immigrant half her age, Ali (El Hedi ben Salem, Fassbinder’s lover at the time). Fear Eats the Soul works with many themes that Fassbinder ceaselessly explored, but it also retains an easy, surface-level likeability on account of its two charming leads and incisive exploration of how people behave when they need other people.