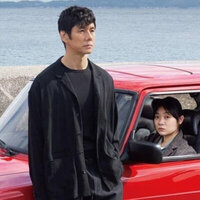 Based on the short story of the same name by beloved Japanese author Haruki Murakami, rising talent Ryusuke Hamaguchi’s newest film, Drive My Car, finds a beloved theatre director, Yusuke Kafuku, deep in mourning at the sudden loss of his wife as he prepares a production of Uncle Vanya for an upcoming festival. With an attentiveness to procedure and a knack for subtle characterization, Hamaguchi brings us along through casting and rehearsals, all the while Kafuku slowly bonds with his driver, Misaki, who is charged with ferrying the director around town in his treasured Saab. Cinematic storytelling at its finest, Drive My Car will appeal to fans of the 2019 Webster Film Series hit Burning—also adapted from a Murakami short story—and has been snatching up prizes everywhere it plays, from Best Screenplay at Cannes to being Japan’s submission to the Academy for this year’s Best International Film category at the Oscars.