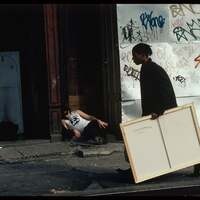 A nearly unrivaled cinematic document of the early 80s art scene in New York City, Downtown 81 follows the legendary Jean-Michel Basquiat as he tries to shore up enough money to evade eviction, and of course his main method of collecting said money is by selling his art. Aside fromspending time with Mr. Basquiat, one of Downtown 81’s chief pleasures is plunging the viewer into this fertile artistic culture while recognizing many faces along the way: John Lurie and Eszter Balint of Stranger Than Paradise, Cookie Mueller, Debbie Harry, Vincent Gallo, Ronnie Cutrone, Fab 5 Freddy, and countless others.

With an introduction and post-film Q&A wine reception with Gary Passanise, Professor of Art in the Leigh Gerdine College of Fine Arts at Webster University in St. Louis, and multimedia artist John K. Blair