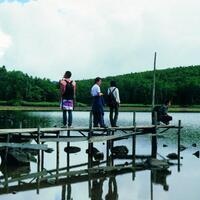 Doomed by timing but not by quality, Distance had its North American premiere at the Toronto International Film Festival on September 10, 2001. The film takes the Aum Shinrikyo sarin gas attacks on the Tokyo subway in 1995 as reference point, here looking at the aftermath of a (fictional) extreme Japanese sect who poisoned Tokyo’s water supply and committed mass suicide some years prior. On the anniversary of the attack, surviving members of the families of the terrorists convene on the lake where the sect members killed themselves, only to discover that in their midst is a member of the cult, Sakata (Tadanobu Asano of Silence and Ichi the Killer), who defected at the last minute.