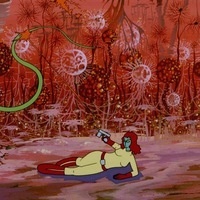 Romania’s first animated feature, the 1984 sci-fi adventure Delta Space Mission, finally arrives in the U.S. Presented in a gorgeous new 4K restoration, Delta Space Mission is a vivid fantasia of warping perspectives, alien worlds, and geometric machinery, all accompanied by a chirpy, charmingly distinctive electronic score by Călin Ioachimescu. The off-kilter story, just as strange as the film’s arcade cabinet aesthetic and artificial soundscape, follows the alien reporter Alma as she’s pursued by the seemingly omnipotent computer brain Delta after it falls madly in love with her, leaving a trail of destruction in its wake as it heedlessly pursues the apple of its electric eye.

In Romanian with English subtitles.