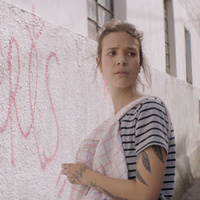 Days of the Whale

From July 24th to August 6th, Film Series patrons can rent Days of the Whale. The debut feature from Catalina Arroyave, Days of the Whale, follows the politicized street artists Cris and Simón in Medellín, Colombia. This tense coming-of-age story finds Cris fearing for her safety after painting over a warning issued by a local street gang. Happily, the film allows plenty of space to celebrate art--Ms. Arroyave has cited Patti Smith, Andrea Arnold, and Alfonso Cuarón as influences--and doesn't allow itself to become your average thriller.