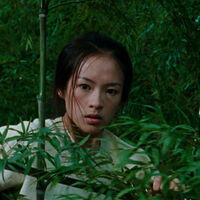 From 9/11 to 9/24, Film Series patrons can watch (for free!) Crouching Tiger, Hidden Dragon. Still the highest-grossing subtitled movie in the American box office after all these years (at $128 million; last year’s smash Parasite, by comparison, grossed $53 million), Ang Lee’s Crouching Tiger, Hidden Dragon remains a cultural touchstone around the world, winning new fans and influencing filmmakers ever since it premiered at the Cannes Film Festival in 2000. This wuxia, set in the 18th century Qing dynasty, follows the female warrior Yu Shu Lien (Michelle Yeoh) and the aristocratic young Jen Yu (Zhang Ziyi, in a star-making role), and the men they become entwined with—Li Mu Bai (Chow Yun-fat of The Killer and Hard Boiled) and Dark Cloud (Chang Chen of The Assassin and the forthcoming adaptation of Dune). With fight choreography by the legendary Yuen Woo-ping (Drunken Master, Kill Bill, The Matrix, The Grandmaster… you name it). Sponsored by the Confucius Institute at Webster University.

For Webster students, staff, and faculty, just follow this link.

Everyone else can watch by following these steps: