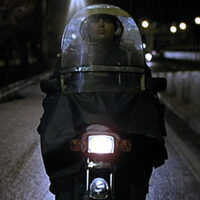 Recently famous for films made while under house arrest in Iran and subsequently smuggled out of the country (This is Not a Film, Tehran Taxi), director Jafar Panahi already had an international following at the time he was jailed. Said reputation rests on the shoulders of films like 2003's Crimson Gold, made with a script by Abbas Kiarostami (whom Panahi began his career by ADing under), in which we unravel what led a man to commit a murder/suicide. Our lead is Hussein (played by nonprofessional actor Hossain Emadeddin, a real find; his charm and likability calls to mind an out-of-context Andre the Giant), a pizza delivery man who is confronted with class struggle both in his endeavor to have a dignified wedding by day and when navigating the streets at night.