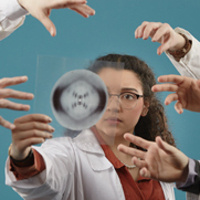 The Webster's Conservatory of Theatre Arts presents Photography 51 April 5-7 on Stage III. This production is a Directing Capstone Project.

A humorous and moving portrait of Rosalind Franklin, one of the great female scientists of the twentieth century, and her fervid drive to map the contours of the DNA molecule. A chorus of physicists relives the chase, revealing the unsung achievements of this trail-blazing, fiercely independent woman. The play captures themes of ambition, isolation, and the race for greatness.

For tickets to all Conservatory of Theatre Arts productions Call (314) 968-7128
Webster Students, Faculty, and Staff Free with a valid ID
$15 for Adults
$7 for Seniors, Alumni, and Non-Webster Students
$2 for children 12 and under