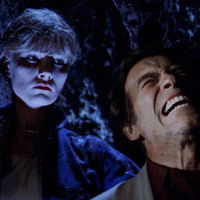 City of the Living Dead

Each film is available to watch on streaming services or VOD. Watch each film ahead of time and then join us every Thursday evening for an in-depth discussion.  On Thursday, April 8th, at 7pm, Aaron Christensen, Rondo Award-winning genre film journalist, editor of two bestselling guidebooks, and the main brain behind HORROR 101 with Dr. AC, will discuss:

City of the Living Dead

The first film of the Gates of Hell trilogy, City of the Living Dead opens with a priest committing suicide in a cemetery. This sacrilegious act results in the Gates of Hell being opened, at which point the plot hinges on whether a reporter and a psychic can get them closed before the dead rise on All Saints Day, just three days away. On the way to achieving this goal, our heroes encounter all manner of horrors, brandished by the film in creative and disturbing ways—power drills, maggots, intestines, you name it.