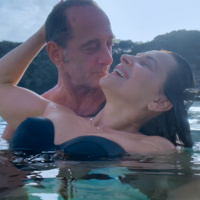 Both Sides of the Blade

The first of two features beloved auteur Claire Denis has lined up for release this year, Both Sides of the Blade is an erotic melodrama that has frequent collaborator Juliette Binoche (Let the Sunshine In, High Life) as Sara, who finds herself trapped in a love triangle between current partner Jean (Vincent Lindon, Friday Night) and former lover François (Grégoire Colin, Beau travail), who just offered Jean a job. Previously known under its festival title of Fire, Both Sides of the Blade also sports Bulle Ogier (Duelle (une quarantaine)) and Mati Diop (star of Denis’ 35 Shots of Rum, writer/director of Atlantics) in its cast and landed Denis the Best Director prize at this year’s Berlin Film Festival.

In French with English subtitles