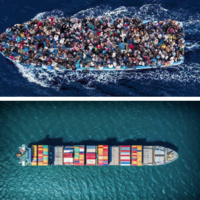 - PUBLIC EVENT OPEN TO ALL; A VALID COVID CERTIFICATE AND MASKS ARE MANDATORY TO ATTEND THIS EVENT ON CAMPUS -

The conference will represent the main opening event of "Blutopia: forum Mediterraneo", an open program of activities (such as conferences, seminars, round tables, talks), dedicated to various (mainly legal) Mediterranean sea related matters.

The aim of the conference is to gather the points of view of different stakeholders about the importance of institutional and NGOs’ search and rescue activities in the context of the large-scale migration crisis in the Mediterranean sea, in the light of human, legal, operational and economic reasons.

The event, co-organized by the law firm Iustopia and Webster University’s IR Department, and moderated by Andrea Pappalardo, will welcome the precious contributions of the following distinguished speakers:

- Jacopo Giorgi, UNHCR. Jacopo Giorgi works at the Division of International Protection of the UN High Commissioner for Refugees, where he heads the Asylum and Migration Unit. Previously, as Senior Staff Development Officer at the Global Learning and Development Center, he coordinated and delivered learning programmes on the protection of refugees and internally displaced persons for UNHCR and partners. In the past he covered different positions at UNHCR, OHCHR and NRC, in HQ as well as in operations, including in the Philippines, Bosnia and Herzegovina, Sudan and Italy. He holds a LL.M. from the University of Trento (Italy), a Diploma in European Legal Studies from Lancaster University (UK) and a MA in Theory and Practice of Human Rights obtained at the University of Essex (UK).

- Michele Cavinato, UNHCR. Michele Cavinato is currently working with the Secretariat of the United Nations Network on Migration. He recently joined the position after Heading the Asylum and Migration Unit in UNHCR and previously being assigned as a Senior Legal Officer with the Bureau for the Middle East and North Africa. Before joining UNHCR headquarter in Geneva, he worked as a Policy and Legal Officer with UNHCR Bureau for Europe in Brussels where, inter alia, he focused on the recast of the EU acquis on Asylum. During his career with the United Nations, he was posted for almost ten years in Africa including in Uganda, Democratic Republic of Congo, and Burundi. Before joining the United nations in 2001, he worked with the Office for Security and Cooperation in Europe in Kosovo and Bosnia Herzegovina. He also collaborated with an Italian NGO. He holds a LL.M, a post lauream specialization in EU Law from the University of Bologna (IT) and a Master on International Law, Development Policy and Management from the Ruhr-Universität of Bochum (DE) and la Sapienza University (IT).

- Richard Watts, founder of HR Maritime, based in Geneva to provide bespoke consulting, outsourcing and training services to the trading and shipping community. Richard Watts has over 20 years experience in shipping, trading, insurance, finance and legal matters relating to physical commodities. Richard Watts is the President of the Geneva branch of The Propeller Club and a Fellow of The Institute of Chartered Shipbrokers. Unrelated to his daily work, Richard Watts is also the President of SOS MEDITERRANEE Suisse.

- Caroline Abu Sa’Da, Executive Director of SOS MEDITERRANEE in Switzerland. Caroline Abu Sa’Da has led humanitarian programs in the field, notably in the Middle East and the Horn of Africa, for Oxfam GB, the United Nations and MSF (Doctors Without Borders) Switzerland and has a Ph.D in Political Science from Sciences Po Paris. Caroline Abu Sa’Da is the author of numerous papers, reports and chapters on humanitarian action, NGOs and the Middle East, as well as books, and documentaries, and has taught political science at New York University, Sciences Po, and the Universities of London and Manchester. Caroline Abu Sa’Da has also been the Director of the Research Unit of MSF Switzerland, and the Editorial Responsible for the International Film Festival and Forum on Human Rights in Geneva.