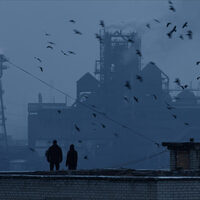 From 2/12 until 2/25, Film Series patrons can rent Atlantis. Taking some aesthetic cues from Children of Men, writer/director/DP/editor Valentyn Vasyanovych (previously cinematographer on 2014 standout The Tribe) has created a sci-fi world somewhat at odds with what you tend to see depicted at the movies. Taking place largely in a series of tableaux, former soldier Sergiy, who suffers from PTSD, struggles to adjust to a rapidly changing dystopian society. A whiff of faith comes in the form of Katya, whose presence may be able to restore some semblance of the old normal to Sergiy's life. Ukraine's official submission to the Academy for the 2021 Oscars, Atlantis further establishes Vasyanovych as someone to watch on the stage of world cinema.