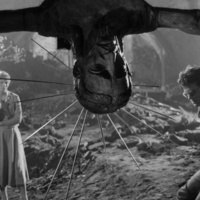 Canonized Polish director Andrzej Wajda’s third feature film, after 1955’s A Generation and 1957’s Kanal (both also about WWII), 1958’s Ashes & Diamonds is arguably his masterpiece. In it we find Polish soldier Maciek on the last day of World War II who has been charged with assassinating the new commissar who has been deemed too friendly to the occupying Soviet forces. In his endeavor to do so he meets the barmaid Krystyna, who gives him a glimpse at another route his life could have taken.