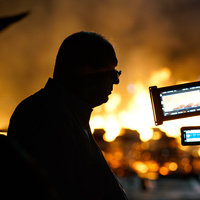 MacArthur Genius Grant winner Errol Morris has long been attracted to those on the fringes of society and/or problematic figures. He has made past documentaries about people on death row (The Thin Blue Line), those involved in the Abu Ghraib scandal (Standard Operating Procedure), a Holocaust denier (Mr. Death), Donald Rumsfeld (The Unknown Known), and Robert McNamara (The Fog of War, for which Morris won an Oscar). And yet American Dharma, a feature-length interview with Steve Bannon, is the Morris film that has most struck a cultural nerve. Never one to shy away from tangling with controversy, and more than capable at holding his own in an interview when need be, Morris offers American Dharma as a vital text to help us understand how we’ve arrived at the cultural moment we’re finding ourselves in.