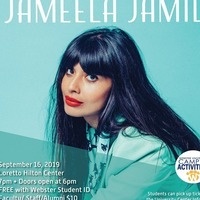 THIS IS AN EVENT THAT WAS RESCHEDULED TO DEC. 9

For those who already bought tickets for September: Already distributed tickets will be valid for the Dec. 9 date - do not lose your tickets, as they cannot be reissued.  Those who have purchased tickets will be contacted by Campus Activities via email. We thank you for your patience in this matter.

Jameela Jamil, star of the hit television show "The Good Place," will speak at Webster University on Dec. 9, 2019 in the Loretta-Hilton Center. Tickets go on sale Aug. 26 at 10 a.m.

Jameela Jamil is an English born actress, writer, DJ, model and radio host. She was discovered at 22 years old when she was teaching English in London, UK. Her first job in media was a main host on T4, the UK's leading youth entertainment show where she made a name for herself interviewing famous actors and musicians. She also became a journalist for Cosmopolitan Magazine and the Huffington Post. After 2 years she became the face of Maybelline and Nails Inc and in 2012, she released her own clothing line after much success in the fashion industry and having shot for both British and American Vogue, Glamour Magazine, Cosmopolitan Magazine and Japanese teen vogue. 2012 also saw her nominated for the PPA and BSME awards for her writing.

Later that year she was recruited by BBC Radio 1, to host her own show on their network, which would lead to a promotion in 2013, where she made history as the first woman in its 60 years on air, to host the Official Chart on the esteemed radio station. With much success, including several awards for radio and a growing DJ career she stayed on at the network until 2015, when she left to pursue a writing career in the United States. After signing as a comedy writer at 3ARTS and being taken on by UTA, in spite of never having acted before, she was sent to audition for Michael Schur's latest project on NBC, The Good Place (2016), to star opposite Ted Danson and Kristen Bell. The comedy series aired in the fall of 2016 to tremendous success and accolades and was continued through 2017, 2018 and for its fourth (and sadly last) season, later this year. Past seasons can be watched on Netflix and other streaming services.

Most recently, she has been an activist on women's body-imaging issues and has openly discussed her struggle with eating disorders, as well as her childhood where she was born with congenital hearing loss and labyrinthitis. As a teenager, she also was in a horrific car accident that broke her back, leaving her bed-bound for a year.

Tickets for the show are free to all Webster students with a student ID, $10 for faculty, staff and alumni, and $20 for the general public. Tickets must be picked up or purchased ahead of time. Students can pick up their tickets from the University Center info desk. Purchased tickets can be obtained at www.webster.edu/student-engagement/campus-activites/

ACCESSIBILITY:
Campus Activities is committed to making our events accessible to everyone. If any accommodations are needed, please contact Lisa Camp at 314-246-7837 or email at lisacamp35@webster.edu Request should be made as soon as possible.

free for Webster students; $10 for faculty, staff and alumni; $20 for the general public.