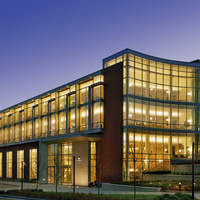 Although Webster University did not build its first library until 2003, the campus did have access to a library collection throughout its history. Originally the library occupied space in Webster Hall, the original administration building which opened in 1916. Then the collection was moved to Eden Theological Seminary's Luhr Library in 1969 as part of a joint agreement between the two institutions.

Lack of space for the growing collection and staff forced university officials to address the library's future. At first they considered adding on to the Luhr Library but soon changed their minds and decided to build a new building on Webster's campus. A parking lot and small building known as the Brown House were torn down to make way for the structure. Although the library used commercial movers to transfer the bulk of the collection from Luhr to the new building, the last 100 books were moved via a book chain on June 30, 2003. The last book moved was A gentle madness: bibliophiles, bibliomanes, and the eternal passion for books by Nicholas A. Basbanes. The Emerson Library formally opened for business on July 1, 2003.